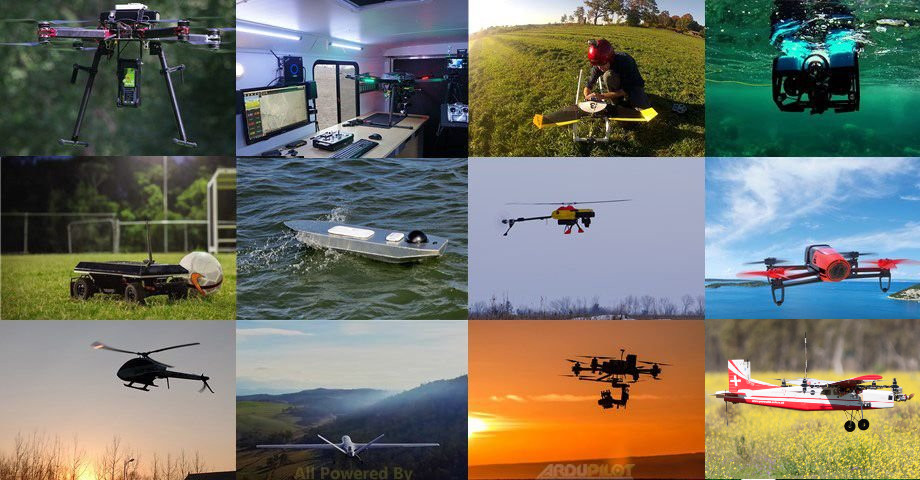 A while back, I made a few posts about the PX4 drone flight control stack and how to develop controllers within PX4’s Gazebo simulator. However, another widely-used flight control stack is ArduPilot - which has actually been used in various forms on multirotor UAVs (drones), fixed-wing UAVS, AUVs (autonomous underwater vehicles), AMRs (autonomous mobile robots), and beyond. ArduCopter or Copter for short is one of the most popular variants of Ardupilot, seeing hobbyist, academic, and professional use.

The goal of this post is to dive into ArduCopter as we did for PX4 - specifically, how to set up SITL (simulation in the loop) using Gazebo and ROS. The cool thing is that both PX4 and ArduCopter use MAVLink as a shared messaging protocol, meaning that it’s largely possible to write high-level code which is entirely agnostic of your choice of flight controller! Further, as we saw in the PX4 tutorial, we can use MAVROS - the ROS package which wraps MAVLink communication - to abstract away the flight controller even more. Let’s take a look at how it all fits together.

There are a number of great guides which I’ve drawn material from, namely this guide from the Air Force Research Laboratory but this Ardupilot wiki thread and this open-source guide are also useful resources. Another useful setup guide which also has useful information about Gazebo vs FCU frame definitions is here.

Note that some of these instructions may be a bit out of date since this material was originally written in late 2019; this work was done on an Ubuntu 16.04 installation with ROS Kinetic. I haven’t gone back through the setup lately, but I expect the general process should be similar for newer versions of these packages.

Setting up Gazebo and the Ardupilot plugin

We follow the instructions from the Ardupilot setup guide which explains how to build the plugin and get SITL working; we’ll summarize some of the pre-build steps and the build itself below.

Since the prerequisites of Gazebo and ROS packages are the same as those we detailed in the PX4 setup blog post, we can actually use the nice ubuntu_sim_ros_melodic.sh install script from the PX4 install guide to handle these assuming we’re targeting Ubuntu 18.04/ROS Melodic.

If you prefer to install Gazebo

Of course, you’ll need to have the Gazebo simulator installed; this comes with full installations of ROS and was also installed and configured during the PX4 SITL setup guide, so we won’t go into much detail here.

Note that as of this writing (originally started in late 2019) You must have Gazebo version>=8.0 installed; check with gazebo --version. To upgrade eg to 9.0 following the official guide, first add sources:

Then uninstall old gazebo versions and install the new ones:

We won’t go into detail on installing ROS here - see the melodic install guide for details. When this is complete, you’ll want to set up a catkin workspace and clone MAVROS there, then build.

You must also have boost version > 1.58 installed (again, as of this writing). Unfortunately, version 1.58 is the default for Ubuntu 16.04, so users of this distro must upgrade boost. Following this guide to upgrade to boost 1.66, first purge the old boost:

Then download and install the new version (the install step will take at a few least minutes):

After this finished, run cat /usr/local/include/boost/version.hpp and check that you see the line

which corresponds to version 1.66, as expected.

Once the prerequisites above are installed, clone and build the Ardupilot Gazebo plugin as follows:

This last step will install ardupilot-related models in /usr/share/gazebo-X/models (X is the Gazebo version) and install the plugin itself in /usr/lib/x86_64-linux-gnu/gazebo-X/plugins. These directories must be added to the appropriate Gazebo paths by adding the following lines to the end of your ~/.bashrc:

The world file /usr/share/gazebo-9/worlds/iris_arducopter_runway.world specifies loading a runway world with an iris model. If either wasn’t loaded properly (check terminal output) then double-check the model and plugin paths after installation.

Building and Running ArduCopter for SITL

With Gazebo set up and the Ardupilot plugin installed, we’re ready to install the actual Ardupilot library and configure it for simulation in-the-loop testing on the type of vehicle we’re working with (Copter) as follows:

This builds the target build/sitl/bin/arducopter for simulation use rather than to be run on an embedded flight controller (we’ll discuss how to run ArduCopter on actual hardware later). The SITL launch script is python Tools/autotest/sim_vehicle.py which requires installing some prerequisites before running:

First, add the path to the python script for SITL by appending the following to the end of your~/.bashrc:

and re-source ~/.bashrc. Now we first run Gazebo with, as before:

from anywhere to run the Copter simulator (note that if you were to instead run sim_vehicle.py -w from the ardupilot/ArduCopter directories then it would load Copter by default based on your working directory). You should now see some printout in the terminal as the flight controller starts up! This leaves you at the SITL command prompt MAXProxy where you can issue commands; this is like a simulated version of MAVLink. Let’s try some basic commands to get started.

Now that we have the simulation running and connected to the flight controller running in terminal, issue the following commands with some pause between each in MAVProxy (the SITL command prompt):

This will arm the copter and cause it to take off to a height of two meters. If the GPS does not have a 3D lock, arming will fail with the pre-arm check FCU: PreArm: Need 3D Fix. This will occur each time arming is attempted until the following is printed, confirming the EKF has initialized with GPS:

The simulation takes some time to initialize the GPS and IMU-based Extended Kalman Filter (EKF) positioning system, so be sure to wait until the Flight Control Unit (FCU) reports that the EKF2 is up and running with simulated GPS as above.

Of course, flight control modes themselves and their implementations will differ, and so performance won’t be one-to-one. In terms of mechanics, though, we should be able to run what we’ve already written for PX4 in our new Gazebo + Ardupilot SITL setup.

The only package we’re missing at this point (unless you already happen to have it installed on your system from another tutorial) is MAVROS, which can be installed via apt for your system’s ROS distribution using

See the ROS package usage for more details on how to use MAVROS with your FCU.

The high-level control node we wrote in the PX4 tutorial simply tracks a circle in the X-Y plane at a fixed height (Z position). The following code implements this controller using MAVROS to bridge between ROS and ArduCopter via MAVLink; note that the only difference from the PX4 example is that the flight mode for offboard control is GUIDED in ArduCopter, rather than OFFBOARD for PX4.

As for PX4, we use ROS services to arm the motors ("mavros/cmd/arming") and set the flight mode ("mavros/set_mode"), a ROS subscriber to get the current state of the drone from for simulated FCU running an EKF ("mavros/state"), and ROS publishers to set the desired local-frame pose ("mavros/setpoint_position/local") and twist ("mavros/setpoint_velocity/cmd_vel_unstamped").

We can wrap the above code into a ROS node called for example offboard_control_circle_node in a drone_control package, and run it with MAVROS connecting to the simulated flight controller running ArduCopter and Gazebo (as described in previous sections) with:

The offboard controller should load, receive all parameters and start the mission.

If the simulated drone just sits on the ground and arms/disarms repeatedly forever, with output in the terminal like:

then the problem, according to this issue, is that a takeoff command (service) must be commanded before sending setpoints in a GUIDED mission. While the example PX4 offboard controller did not work because of this issue, this example worked out of the box for ArduPilot.

This post was mostly taken from some of my old notes on using ArduCopter for SITL flight control - if something doesn’t work as of this writing, please feel free to comment below! Next post, I’ll share some of my notes about details of the low-level flight controllers. After that, we’ll introduce how to set up an airframe with a flight control unit, offboard computer (either Raspberry Pi or Nvidia TX2), and run our example task outdoors on real hardware.